James Harper
Research Writer
Being a professional journalist, James knows how to turn any topic into a comprehensive, easy-to-digest text. Even if you've never dealt with telescopes before, rest assured read more

The Optics is reader-supported. We may earn a commission through products purchased using links on this page. Learn more about our process here

When you are shopping for a new rifle scope, thinking about upgrading your current rifle scope or looking into getting a rifle, there is a chance that you have come across the phrase FFP vs. SFP. It’s a critical part of the  focus system Trusted Source Focus (optics) - Wikipedia In geometrical optics, a focus, also called an image point, is a point where light rays originating from a point on the object converge. en.wikipedia.org  when it comes to optics.

The debate between FFP vs. SFP has long been a hot topic in the world of rifles. Before anyone even starts shopping for a scope, they are asking the question, “Which one is better?” but before the question can be answered, you have to understand what SFP and FFP mean regarding the scopes.

It all depends on what the shooter preference is on the magnification of the reticle in the scope. Here we’ll take a deeper look at what that means and which one is best for you.

What is the first focal plane? 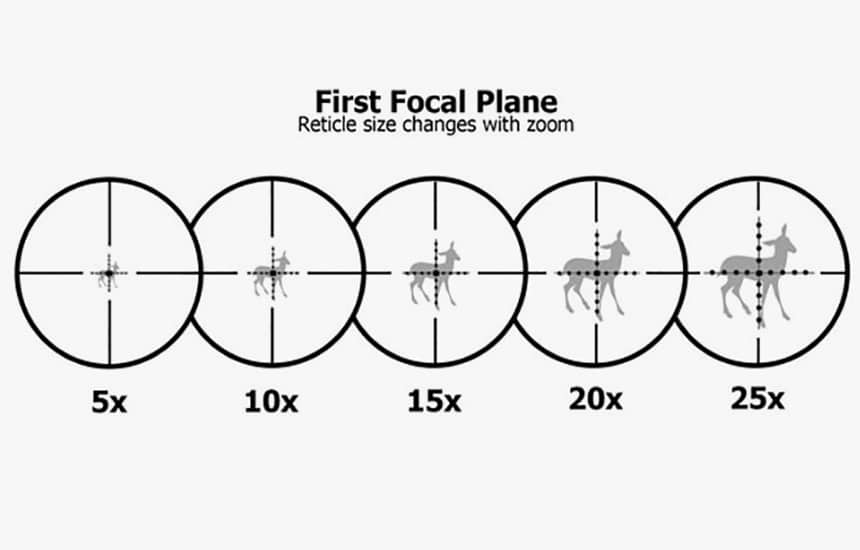 The primary advantage is that when you zoom in on your target, the reticle is also zooming in on the target as well. Breaking this down, the marks will stay the same no matter how big you magnify it.

The advantage with FFP reticles is that they offer the same sub tensions regardless of the magnification. This is particularly important when you are adjusting for ballistic corrections for trajectory or wind and you do not want to worry about magnification.

While this may not seem like a big deal to some, with an FFP reticle, the proportions coincide to the target. It’s important to get one of the top-rated FFP scopes as this will give you increased accuracy. If you are looking for an FFP model, then our experts would recommend the Vortex 4-16×44 Diamondback Riflescope, which has a range of excellent features.

What about the second focal plane?

With the magnification working best at the highest setting, you should do well with this scope. For those searching for a compact SFP model, we highly recommend the Leupold VX-Freedom 3-9×40 riflescope. Some factors to consider when purchasing an SFP scope are crosshairs, magnification settings, and long-range shooting.

SFP scopes are the most common among outdoor enthusiasts. This does not necessarily mean that they are better, but they are produced in mass quantities because they are easier to produce.

Another easy thing about the SFP scopes is that they have easily visible crosshairs when it comes to every magnification setting. There is no change in the crosshair size when you adjust the magnification. This makes it easier to see, especially when you are using the scope for hunting.

Which type is the best for me?

FFP scopes are newer when it comes to FFP vs. SFP for target shooting, but they are quickly gaining traction as being the most popular scope. When picking your scope, you will have to base your purchase on where you aim to hunt. FFP scopes are not the ideal choice when you are hunting out in the woods. However, if you are hunting out in the country where you can get a longer shot in or will be shooting distances greater than 500 yards, they can be better.

Both SFP scopes vs. FFP scopes can also work well at close shooting and can work just as well shooting further distances if you take the extra steps to ensure your power matches what the optimization of the reticle is.

High-quality scopes are usually treated to repel water, so drops do not affect the shooter’s visibility. This allows you to use the scope in various elements, like when it is raining. Some scopes get multilayer treatments and can be fully coated. Some treatments help reduce glare and make sure that enough light is reaching the eyepiece. This also ensures that the lighting is adequate to the sensitive human eye when it is daylight and twilight.

When you look into the magnification of the hunting scope, think about what your hunting habits are. One good way to figure out what specifications you will need on the lens is the magnification x diameter. This will present itself as “12×56”. The first number is magnification, so here we have 12x magnification.

It will show you an object at 1,200 yards as if you are really looking at it from only 100 yards. The second number is the diameter, and here we have 56 (mm). The diameter size determines how much light will enter. The bigger the lens, the more light will enter. This is very important when you are shooting in more difficult or darker conditions, and you have wanted a specialist night vision scope.

It may seem like just a physical feature, but you have to take into account the chemistry that affects the glasses. The lens undergoes a series of treatments to make the brightness higher and enhance the quality of details. What happens is a loss of details called chromatic aberration.

So which one is better? Well, an FFP scope is generally seen as the better of the two, but many users still enjoy using SFP scopes. As we’ve looked at here, there are also plenty more features to look out for when determining the best overall scope for you.

Which rifle scope is better for hunting, SFP or FFP?

When looking at FFP vs. SFP riflescopes for hunting, you will need to figure out what best suits you and what type of hunting you do. If you are planning to shoot more than 500 yards, FFP scopes are ideal.

SFP scopes are more suitable for close-range shooting and can work well at longer distances if you take a few extra seconds to adjust for the correct power on the reticle. If you are still unsure which scope would work best for you during hunting seasons, you can consider grabbing an SFP scope that has adjustable features for elevation and windage turrets.

The turret additions allow you to dial the scope up when needed. If you decide to use this method, reticle measurements are removed from the equations, and you can hold dead on your subject at any distance you’re comfortable with.

Both apply ballistic corrections when shooting long-range shooting, and they are both reliable and durable. When comparing the two, you cannot compare them in how they work, but how they will be used.

Which is more expensive, SFP or FFP?

FFP scopes are more commonly expensive than SFP scopes. FFP scopes typically cost more because the reticle has features that are smaller, and they are more expensive to produce. The FFP is more equipped to deal with range and power.

This is essential because you can use any range with any power on the FFP. So this brings the question up is the FFP scope worth more money? If you are really going to invest in your long-range shooting, then an FFP scope would be worth the investment.

If you wanted a budget scope, then look for an SFP model. There are many great rifle scopes available under $200.

Do snipers use FFP or SFP?

Military and police snipers have more use for FFP scopes. Their work literally depends on the accuracy of a follow-up shot, and it needs to be rapid.

In any case, the shooter has to be able to quickly implement a correction if they need to fire off a second shot. First focal plane optics make it significantly easier.

What is a focal plane in optics?

Understanding the focal plane in optics is crucial to understanding what scope will work best for you. The plane on the rifle scopes is determining where the reticle is placed inside the physical assembly of the rifle relative to the erector assembly. The erector is where the magnification of the scope happens. 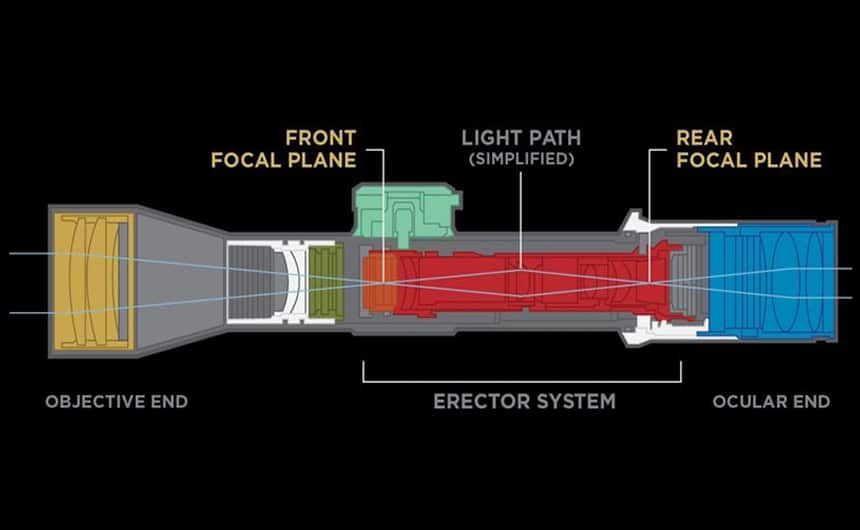 New and updated technology is giving hunters more choices when it comes to choosing their gear. Let’s have a quick look at the pros and cons of each option.

First Focal Plane is best for:

Second Focal Plane is best for:

Hopefully, by now, you have a good understanding of the difference between these two focal planes. It’s essential to understand how it can affect your shot.

While FFP vs. SFP is a critical consideration, it’s also important to realize that there’s a lot more to scopes than just the focal plane. When choosing the right one for you, it’s important to take all the other features into account.